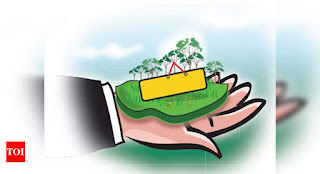 Noida: The Noida Authority has decided to take back possession of two land parcels allotted in 2010 to the Logix group for which, officials say, it hasn’t been able recover dues of Rs 1,384 crore.The plots – in sectors 105 (seven acres) and 124 (nine acres) – had been transferred to Logix subsidiaries in June 2010 and December 2010. The group was to develop a retail unit – mall and multiplex – and office space in Sector 105 and had similar plans for Sector 124 with a limited number of residential suites.

Officials said the group failed to pay up its instalments along with compound interest to the Noida Authority. For the Sector 124 plot, the Noida Authority claims its dues amount to Rs 796 crore while for the Sector 105 plot, it is yet to receive Rs 588 crore.Kumar Sanjay, officer on special duty at the Noida Authority who heads the commercial division, said Logix Group subsidiaries were given a lot of time to come to the table and pay up the dues. “But we decided to cancel the allotment as we got no concrete response from them,” he said.Both plots lie close to the Noida-Greater Noida Expressway. No construction work has taken place at the sites.TOI got in touch with Vikram Nath, a director of the Logix group, but he declined to comment.The decision to cancel the allotments made to the Logix group is the latest in a series of similar measures Noida has taken this year. Over the past few months, the Noida Authority has acted against more than 22 allottees for dues that it claims amount to more than Rs 7,500 crore. The biggest of these was in April when prime commercial land Sector 32 was taken back from the Wave group.The Noida Authority has also issued recovery certificates to four other companies, among them the Supertech group (Rs 27 crore). The three other companies are MMR Saha Infrastructure Pvt Ltd for land allotted in Sector 52 for which Noida claims it has to recover Rs 869 crore, Granite Hills Properties Ltd for its property in Sector 98 (Rs 350 crore) and ET Infra Developers Pvt Ltd for a plot in Sector 16 (Rs 63 crore).